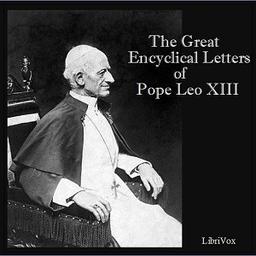 He is well known for his intellectualism, the development of social teachings with his famous papal encyclical Rerum Novarum and his attempts to define the position of the Catholic Church with regard to modern thinking. He issued a record eleven encyclicals on the rosary earning the moniker the "Rosary Pope".

This book includes thirty of his most well know encyclicals and letters. They cover a wide range of subjects, including, Christian marriage, socialism, communism, freemasonry, Anglican orders, and human liberty. Some of the encyclicals included in this volume are: Inscrutabili, Rerum Novarum, Quod Apostolici Muneris, Humanum Genus, Arcanum Divinae, Immortale Dei and many others. (Summary adapted from Wikipedia and by Maria Therese)

You are listening Great Encyclical Letters of Pope Leo XIII audio by Pope Leo XIII.
Dont forget to share if you like it.
If there is a problem or copyright issue. Let us know by sending the link of this page to email: report@audioaz.com.
Report

How I Know God Answers Prayer