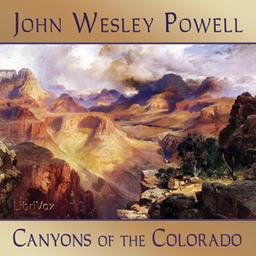 Canyons of the Colorado

John Wesley Powell was a pioneer American explorer, ethnologist, and geologist in the 19th Century. In 1869 he set out to explore the Colorado and the Grand Canyon. He gathered nine men, four boats and food for ten months and set out from Green River, Wyoming, on May 24. Passing through dangerous rapids, the group passed down the Green River to its confluence with the Colorado River (then also known as the Grand River upriver from the junction), near present-day Moab, Utah.

The expedition's route traveled through the Utah canyons of the Colorado River, which Powell described in his published diary as having …wonderful features—carved walls, royal arches, glens, alcove gulches, mounds and monuments. From which of these features shall we select a name? We decide to call it Glen Canyon. (Ironically, now almost completely submerged by Lake Powell, behind the Glen Canyon Dam.)

One man (Goodman) quit after the first month and another three (Dunn and the Howland brothers) left at Separation Rapid in the third, only two days before the group reached the mouth of the Virgin River on August 30 after traversing almost 1,500 km. The three who left the group late in the trip were later killed—probably by Indians.

Powell retraced the route in 1871-1872 with another expedition, producing photographs, an accurate map, and various papers, including ethnographic reports of the area's Native Americans and a monograph on their languages. --adapted from Wikipedia

You are listening Canyons of the Colorado audio by John Wesley Powell.
Dont forget to share if you like it.
If there is a problem or copyright issue. Let us know by sending the link of this page to email: report@audioaz.com.
Report

Mind and the Brain

Offences Against One's Self: Paederasty

History of England, from the Accession of James II - (Volume 3, Chapter 12)

History of England, from the Accession of James II - (Volume 3, Chapter 12)

Life on the Mississippi

Book of the Damned

Extermination of the American Bison

Voyage of the Beagle

Advance of Science in the Last Half-Century

Voyage of the Beagle

Thousand Miles up the Nile

Sailing Alone Around The World