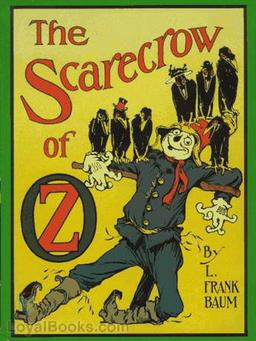 The Scarecrow of Oz

Published in 1915, The Scarecrow of Oz is the ninth book in the Oz book series and focuses on the adventures of Cap’n Bill, Trot, and the Scarecrow, who find themselves entangled in the politics of Jinxland and must work against formidable odds to overthrow its despot and restore rule to its rightful successor. Apart from the appearances of familiar faces, the novel also accommodates a fresh set of characters and magical creatures residing in the Land of Oz, further contributing to its classification as a typical Baum masterpiece.

The installment begins in the calm and sunny California with the introduction of Cap’n Bill, a sailor with a wooden leg, and his young companion Trot as they set out on a relaxed boating jaunt. However, the weather suddenly turns dark and stormy, and as a result, the rowboat gets caught in a whirlpool and is dragged below, only to later surface in a mysterious underwater cavern. Disoriented, the two meet and befriend a peculiar looking creature called an Ork, which resembles a stork, but with a parrot head and propeller tail. Nevertheless, the creature proves to be of great assistance, and helps Cap’n Bill and Trot escape the cave which subsequently marks the beginning of their exhilarating journey, as the novel witnesses the endearing seaman and young girl in a venture to reach the Land of Oz. Moreover, it follows their trail as they make their way across the Land of Mo, past the Deadly Desert, and finally sees them landing in a remote region of Oz known as Jinxland. Here they become acquainted with its turbulent politics and become embroiled in its complex affairs. Soon after they are joined by the Scarecrow who in an attempt to alleviate the dire circumstances and ensure safe passage to Emerald City gets caught up in a scuffle himself. A vibrant depiction of the characters and native wonders of Oz, the novel does not fail to amaze with its portrayal of intrepid travelers and their riveting adventures in the already well known, though unpredictable setting.

Blending natural phenomena, magical berries, witches, politics, and romance into a generous serving of enthralling adventure, The Scarecrow of Oz offers a whimsical episode in the series, while also providing an illustrative portrayal of the Oz landscape.

You are listening The Scarecrow of Oz audio by L. Frank Baum.
Dont forget to share if you like it.
If there is a problem or copyright issue. Let us know by sending the link of this page to email: report@audioaz.com.
Report

Myths and Legends of Ancient Greece and Rome

Dorothy and the Wizard in Oz

The Curious Case of Benjamin Button

Myths and Legends of Ancient Greece and Rome