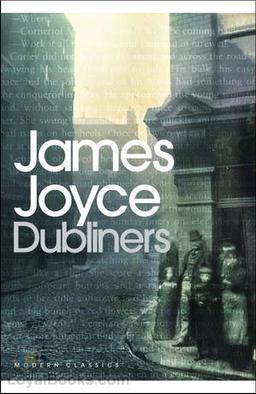 A young boy falls in love with his friend's much older sister and is desperate to get her the perfect gift from the Araby Fair.

After a party, a man discovers something he had never known about his wife, which has a devastating impact on their marriage.

An ambitious mother schemes to get her daughter a role in a series of concerts.

A drunken legal clerk takes out his frustrations on his helpless young son.

These and other brilliant stories are contained in the collection entitled Dubliners. Published in 1914 during the height of the Irish Nationalist Movement, the fifteen stories are an invaluable record of the life and times of the middle class in Dublin. The strangest aspect of this book, which we value so much today, is that it was serially rejected by fifteen publishers before a Dublin publisher agreed to do so. Many publishers wanted certain passages to be cut, while others did not agree with the ending of some of the stories and wanted them rewritten. One of them even burned the original manuscript when James Joyce the author refused to pay for publication. He managed to salvage parts of it and rewrote it with great difficulty. He continued to doggedly pursue his conviction and the result is available today for all of us to marvel at.

Most of the stories here are based on Joyce's personal philosophy that there is an epiphany or a turning point in each of our lives that creates that moment of decision. His style is very simple and he rarely allows his own voice to intrude into the story. He seldom passes moral judgments on his characters and allows readers to form their own conclusions. The tales are best read in sequence, as the characters progress in age from childhood to old age.

A wonderfully evocative collection from a master craftsman who redefined the nature of the English novel!

You are listening Dubliners audio by James Joyce.
Dont forget to share if you like it.
If there is a problem or copyright issue. Let us know by sending the link of this page to email: report@audioaz.com.
Report