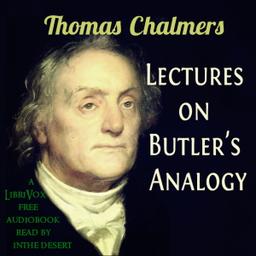 Thomas Chalmers had read, when a young man, several infidel productions. Their semblance of logic and learning, and supercilious confidence of style, disposed him to regard all religion as mere superstition. His mind was poisoned. Accustomed as he had been to the positive and precise reasonings of mathematics, he could not find similar proofs for Christianity. But he was induced, by some friends, to study Butler’s Analogy. This, as he expresses it, took Christianity “out of the class of unlikelihoods.” It brought him to the investigation, as if the evidence was neither plus nor minus. He examined the evidences as he would have done a declaration that Cicero weighed just one hundred and fifty pounds; open to the smallest proof or presumption on the positive side of the question. Delivered from prejudice, not only against Christianity but against its proofs, he soon saw the madness of deism, and immovably accepted the word of God, though he did not, at that time, feel its transforming power on his own heart. Long afterwards he writes, “I cannot render sufficient homage to the argument, which first, addressing itself to the subject-matter of Christianity, relieves it of all disproof, and pronounces it worthy of a trial; and then, addressing itself to the evidence of Christianity, relieves it of all objections, and makes good, to that evidence, all the entireness and efficiency which natively belong to it.” Years afterwards he said, “Butler made me a Christian.” That it did far more for him than to effect his change of sentiment, that it continued to be a light in his firmament, is touchingly told in the Preface of his Bridgewater Treatise, where he says, “I have derived greater aid from the views and reasonings of Butler, than I have been able to find, besides, in the whole range of our extant authorship.” (Summary by Howard Malcom)

Great Sinners of the Bible

How to Succeed in the Christian Life