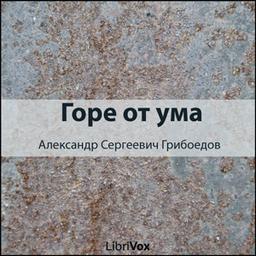 You are listening Woe from Wit [Горе от ума] audio by Alexander Sergeyevich Griboedov, Алекса́ндр Серге́евич Грибое́дов.
Dont forget to share if you like it.
If there is a problem or copyright issue. Let us know by sending the link of this page to email: report@audioaz.com.
Report

Woe from Wit (Russian: Горе от ума, also translated as "The Woes of Wit", "Wit Works Woe" and so forth) is Alexander Griboedov's comedy in verse, satirizing the society of post-Napoleonic Moscow, or, as a high official in the play styled it, "a pasquinade on Moscow."

The play, written in 1823 in the countryside and in Tiflis, was not passed by the censorship for the stage, and only portions of it were allowed to appear in an almanac for 1825. But it was read out by the author to "all Moscow" and to "all Petersburg" and circulated in innumerable copies, so it was as good as published in 1825; it was not, however, actually published until 1833, after the author's death, with significant cuts, and was not published in full until 1861.

The play was a compulsory work in Russian literature lessons in Soviet schools, and is still considered a golden classic in modern Russia and other Russian-speaking countries.

The play gave rise to numerous catch phrases in the Russian language, including the title itself. Many of them sound rather comic today because of their somewhat archaic language. (Introduction by Wikipedia)