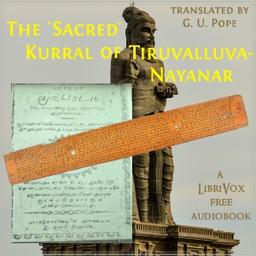 'Sacred' Kurral of Tiruvalluva-Nayanar by Thiruvalluvar

You are listening 'Sacred' Kurral of Tiruvalluva-Nayanar audio by Thiruvalluvar.
Dont forget to share if you like it.
If there is a problem or copyright issue. Let us know by sending the link of this page to email: report@audioaz.com.
Report

Tirukkural (holy couplet) is believed to be written more than 2000 years ago by sage Thiruvalluvar.

This is a metric translation by Rev. G.U.Pope, who says, "In regard to the translation, I may venture to say that it is faithful, and that I have not read into the rendering a single idea or thought which there were not good grounds for supposing that the poet intended to convey. I thought it best to try to give a metrical translation. The Tamil scholar will see that I have tried to reproduce even the rhythm in many cases, but I could not retain the inimitable grace, condensation, and point of the original."

The Kural is hailed for its lofty wisdom. It is said that the Kural contains all things and there is nothing that it does not contain.

This is apparent from the following list of chapter headings of this work (The chapter numbers are prefixed.)

1-The praise of god, 2-The excellence of rain, 3-The greatness of ascetics, 4-Assertion of the strength of virtue - domestic life, 5-Domestic life, 6-The goodness of the help to domestic life, 7-The obtaining of sons, 8-The possession of love, 9-Cherishing guests, 10-The utterance of pleasant words, 11-The knowledge of benefits conferred-gratitude, 12-Impartiality, 13-The possession of self-restraint, 14-The possession of decorum, 15-Not coveting another's wife, 16-The possession of patience - forbearance, 17-Not envying, 18-Not coveting, 19-Not backbiting, 20-The not speaking profitless words, 21-Dread of evil deeds, 22-The knowledge of what is befitting a man's position, 23-Giving, 24-Renown, 25-The possession of benevolence, 26- The renunciation of flesh - penance, 27-Penance, 28-Inconsistent conduct, 29-The absence of fraud,30-Veracity, 31-The not being angry, 32-Not doing evil, 33-Not killing, 34-Instability, 35-Renunciation, 36-Knowledge of the true, 37-The extirpation of desire, 38-Fate,