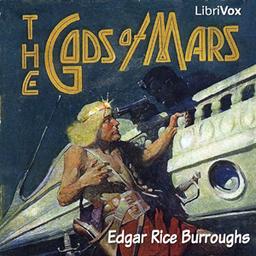 You are listening Gods of Mars audio by Edgar Rice Burroughs.
Dont forget to share if you like it.
If there is a problem or copyright issue. Let us know by sending the link of this page to email: report@audioaz.com.
Report

The protagonist, John Carter, with his proficiency in hand-to-hand combat and flirtations with beautiful alien women, could be said to have set the mold for later influential icons like Captain James T. Kirk and James Bond.

At the end of the first book, A Princess of Mars, John Carter is unwillingly transported back to Earth. The Gods of Mars begins with his arrival back on Barsoom (Mars) after a ten year hiatus, separated from his wife Dejah Thoris, his unborn child, and the Red Martian people of the nation of Helium, whom he has adopted as his own. Unfortunately, John Carter materializes in the one place on Barsoom from which nobody is allowed to depart: the Valley Dor, which is the Barsoomian heaven. (Summary from Wikipedia)