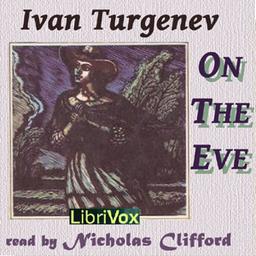 On the Eve appeared in 1860, two years before Fathers and Sons, Turgenev's most famous novel. It is set in the prior decade (by the end of the novel, the Crimean War (1853-56) has already broken out. It centers on the young Elena Nikolaevna Stakhov, daughter of Nikolai Arteyemvitch and Anna Vassilyevna Stahov. Misunderstood by both her parents (Nikolai Artemyevitch is at least as interested in his German mistress as in members of her family) she is on friendly terms with both the would-be professor Andrei Petrovitch Bersenyev and the rising young sculptor Pavel Yakovitch Shubin, both of whom might be -- or might not be -- in love with her. The appearance of Dmitri Nikanorovitch Insarov, a young Bulgarian revolutionary who seeks independence for his nation,, alters the balance of her relationships however. The book is praised, among other things, for the way in which Turgenev manages to describe the varying emotions of a girl on the verge of womanhood. But it is also a portrayal of a kind of youthful Russian society striving towards a modern cosmopolitanism, that will shake off the parochialism and narrowness of its elders.

A geopolitical note: Bulgaria was, at the time, still part of the decaying Ottoman empire in the Balkans, but already the vultures were circling -- Russia, Britain, and France -- hoping to get what they could when the collapse came. Hence, in large part, the coming of the Crimean War, hence the Balkan conflicts of the late nineteenth and early twentieth centuries, hence in part World War I, and ultimately the Balkan wars of the late twentieth century (Kosovo, Serbia, Croatia, Bosnia, etc. etc.). (Summary by Nicholas Clifford)

You are listening On the Eve audio by Ivan Turgenev.
Dont forget to share if you like it.
If there is a problem or copyright issue. Let us know by sending the link of this page to email: report@audioaz.com.
Report

Key to the Riddle