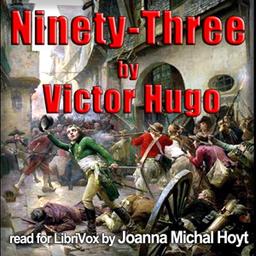 You are listening Ninety-Three audio by Victor Hugo.
Dont forget to share if you like it.
If there is a problem or copyright issue. Let us know by sending the link of this page to email: report@audioaz.com.
Report

1793. The new revolutionary government of France is laboring mightily to end injustice and bring in an ideal new age of liberty, equality, and brotherhood, beginning by killing those obnoxious persons who don't appreciate their ideals. In Vendée a force of peasants, strongly supported by imperial England, is laboring mightily to overthrow the revolutionary government and restore Christianity, family, honor and decency, beginning by killing those obnoxious persons who fail to appreciate those noble phenomena. The exiled Marquis de Lantenac returns from England to lead the Vendéan revolt, to institute a take-no-prisoners policy, and to win a series of bloody victories.

Lantenac is opposed with some success by his great-nephew the Revolutionary officer Captain Gauvain. Gauvain's superiors in Paris admire his courage and tactical skill, but they disapprove of his belief that the principle of brotherhood requires him to show mercy to his enemies. They send their man Cimourdain, whose unyielding principles they trust, to make sure that Gauvain's reactionary mercies and his family loyalty are not causing him to betray the Republic--and to have Gauvain killed if that proves to be the case. They don't realize that Cimourdain, who was once a priest and Gauvain's tutor, loves Gauvain like a son--loves him, perhaps, as much as he once loved God and as he now loves the Revolution.

Meanwhile, the Breton peasant Michele Flechard, who has just lost her home and her husband in a war which she experiences an incomprehensible nightmare, is simply trying to keep her young children alive and get them to some place that won't collapse in blood and fire. Under the circumstances, this appears about as difficult as bringing about either version of the Just Kingdom.

Note: A listener interested in the story, and not in a long excursus on the architecture and the notable names of the French Revolution, could skip the very long Section 27, The Convention, without becoming confused or losing any of the plot. (Summary by Joanna Michal Hoyt)