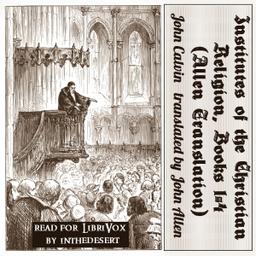 At the head of the list of Calvin’s writings stands his great dogmatic treatise — the Institutes of the Christian Religion. In a very literal sense this book may indeed be called his life-work. It was the first book he published after he had "devoted himself to God," and thus introduces the series of his works consecrated to the propagation of religion. But from its first appearance in the spring of 1536 to the issue of its definitive edition in 1559 — throughout nearly a quarter of a century — Calvin was continually busy with it, revising, expanding, readjusting it, until from a simple little handbook, innocent of constructive principle, it had grown into a bulky but compact and thoroughly organized textbook in theology.
The importance to the Protestant cause of the publication of this book can hardly be overstated. It is inadequate praise to describe it, as the Roman Catholic historian, Kampschulte, describes it, as "without doubt the most outstanding and the most influential production in the sphere of dogmatics which the Reformation literature of the sixteenth century presents." This goes without saying. What demands recognition is that the publication of the Institutes was not merely a literary incident but an historical event, big with issues, which have not lost their importance to the present day. By it was given to perplexed, hard-bestead Protestantism an adequate positive programme for its Reformation. What they needed, and what the Institutes did was the disengagement of a principle "from this vortex of ideas," and the development of its consequences. "Such a book," continues M. Buisson, "is equally removed from a pamphlet of Ulrich von Hutten, from the satire of Erasmus, from the popular preaching, mystical and violent, of Luther: it is a work of a theologian in the most learned sense of the term, a religious work undoubtedly, penetrated with an ethical inspiration, but before all, a work of organization and concentration, a code of doctrine for the minister, an arsenal of arguments for simple believers: it is the Summa of Reformed Christianity."
"The author's concernment is far more to bring out the logical force and the moral power of his own doctrine than to descant on the weak points of the opposing doctrine. What holds his attention is not the past but the future, — it is the reconstruction of the Church." What wonder, then, that it has retained its influence through all succeeding time? As the first adequate statement of the positive programme of the Reformation movement, the Institutes lies at the foundation of the whole development of Protestant theology and has left an impress on evangelical thought which is ineffaceable. After three centuries and a half, it retains its unquestioned preeminence as the greatest and most influential of all dogmatic treatises. - Summary by Benjamin B Warfield

You are listening Institutes of the Christian Religion, Books 1-4 (Allen Translation) audio by John Calvin.
Dont forget to share if you like it.
If there is a problem or copyright issue. Let us know by sending the link of this page to email: report@audioaz.com.
Report

On the Spirit and the Letter

Great Sinners of the Bible