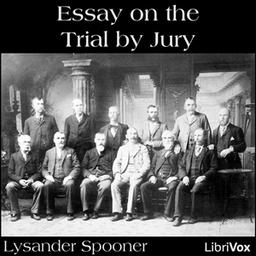 Essay on the Trial by Jury

FOR more than six hundred years that is, since Magna Carta, in 1215 there has been no clearer principle of English or American constitutional law, than that, in criminal cases, it is not only the right and duty of juries to judge what are the facts, what is the law, and what was the moral intent of the accused; but that it is also their right, and their primary and paramount duty, to judge of the justice of the law, and to hold all laws invalid, that are, in their opinion, unjust or oppressive, and all persons guiltless in violating, or resisting the execution of, such laws.

So begins Spooner's epic on the jury, its origins and history. Spooner examines the history and powers of a jury, from the magna carta in King John's time, to the practices in the 18th century. A classic work on law, Spooner argues that the decision of the jury is sovereign over the king's law. (Summary by Bethanne)

You are listening Essay on the Trial by Jury audio by Lysander Spooner.
Dont forget to share if you like it.
If there is a problem or copyright issue. Let us know by sending the link of this page to email: report@audioaz.com.
Report

Anarchism and Other Essays

Parallel Lives of the Noble Greeks and Romans Vol. 2

Reminiscences of Forts Sumter and Moultrie in 1860-'61

History of the Decline and Fall of the Roman Empire Vol. VI

Introduction to the Principles of Morals and Legislation

What Prohibition Has Done to America

Commentaries on the Laws of England (1765)

Introduction to the Principles of Morals and Legislation

What Prohibition Has Done to America

Anarchism and Other Essays