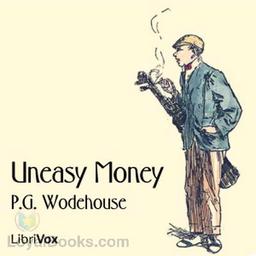 Uneasy Money is a romantic comedy by P.G. Wodehouse, published during the First World War, it offers light escapism. More romantic but only a little less humorous that his mature works, it tells of the vicissitudes of poor Lord Dawlish, who inherits five million dollars, but becomes a serially disappointed groom.

When the story opens Bill (Lord Dawlish, a thoroughly pleasant man) is engaged to a demanding actress. His first thought when hearing of his massive legacy from a stranger whose tendency to slice he once cured on a West Country golf course is of the disappointed relatives. His trip to the USA attempting to give back the windfall results in complication after complication, including firearms and burglaries as well as the usual human misunderstandings that accompany any human life.

A silent, black-and-white film version was made in 1918.

Summary by Tim Bulkeley based on data from Wikipedia

You are listening Uneasy Money audio by P. G. Wodehouse.
Dont forget to share if you like it.
If there is a problem or copyright issue. Let us know by sending the link of this page to email: report@audioaz.com.
Report

The Spirit of Christmas

A Pair of Blue Eyes

The Ball and the Cross

Dawn O'Hara, The Girl Who Laughed

What Dress Makes of Us

A Guide to Men: Being Encore Reflections of a Bachelor Girl

The Man from Snowy River and other Verses

A Pair of Blue Eyes

The Battle of Life

A Guide to Men: Being Encore Reflections of a Bachelor Girl