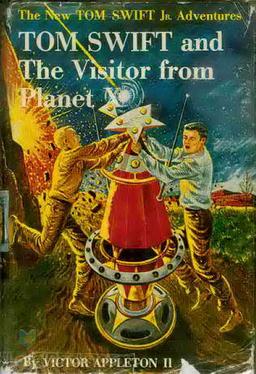 Tom Swift and the Visitor From Planet X

If you haven't come across the 200-book series about Tom Swift Jr, this book would be an interesting one to start with. The series is aimed at the young adult readership, probably male, and the young adolescent hero, Tom Swift Jr is the son of Tom Swift Sr. The books portray the perennially 18-year-old Tom, a tall and angular youngster, possessed of a very high intelligence and presence of mind. Regular characters include his parents, younger sister Sandy, best buddy Bud Barclay, his regular date Phyllis Newton, and the comic roly-poly Chow Winkler. This star cast features in almost all the novels.

Tom Swift and The Visitor from Planet X is an exciting sci-fi tale, in which the inventive and scientifically inclined Tom and friends have set up Swift Enterprises, a vast four-mile facility where inventions are conceived and built. They have established contact with intelligent beings on a distant planet and make preparations to welcome the first visitor from there. However, they're unexpectedly drawn into a deadly internecine battle between diabolical forces on the distant planet which aim to sabotage the visit and destroy Earth. Tom's quick thinking and inventiveness come to the fore as he develops a devastating weapon to counter the evil forces. This exciting tale certainly keeps you interested and engaged.

The Tom Swift series is the product of a writing syndicate called the Stratemeyer Syndicate which published a range of packaged children's literature in the 1950s. Other series include the famous Nancy Drew and Hardy Boys books, all of which were penned by a host of writers employed by this syndicate. In fact the syndicate employed three PhDs in science and technology to ensure scientific authenticity. The series is still running and the last set was published between 2006-7.

You are listening Tom Swift and the Visitor From Planet X audio by Victor Appleton.
Dont forget to share if you like it.
If there is a problem or copyright issue. Let us know by sending the link of this page to email: report@audioaz.com.
Report

Hurlbut's Story of the Bible

The Chessmen of Mars

The Land that Time Forgot

Round the Moon: A Sequel to From the Earth to the Moon

A Girl of the Limberlost

Comic History of the United States

King Arthur and His Knights