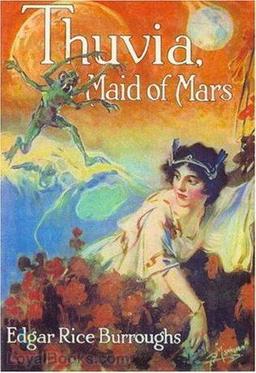 Published in 1920, Thuvia, Maid of Mars is the fourth book in the Barsoom series and concentrates on Carthoris, the son of infamous John Carter, and Thuvia, the princess of Ptarth, as they find themselves entangled in a complex web of love and strict traditions of Barsoom. A typical Burroughs piece, the installment contains all the required elements of an effective pulp fiction, including a hero, a damsel in distress, unforeseen complications, and a generous supply of action.

Welcoming a new protagonist to the scene, Thuvia, Maid of Mars follows the audacious feats of Carthoris, who is incidentally madly in love with the princess of Ptarth, as he gets caught up in numerous predicaments in the name of love. The installment also focuses on the beautiful Thuvia, who is betrothed to Kulan Tith, and according to Barsoomian customs, nothing can break off an engagement as it is a delicate and serious matter. So, Carthoris finds himself in quite the plight as his love appears to be both impossible and unrequited. To make matters worse, Thuvia is suddenly kidnapped, which throws the entire planet into frenzy and threatens the governing peace, as Barsoom is pushed to the brink of war. At the same time, Carthoris embarks on a quest across the planet to save his beloved from harm’s way, while endangering his own safety, as he finds himself in unexplored parts of Barsoom and encounters many obtrusions along the way. Furthermore, Carthoris must not only rescue the princess, but he must also work against the clock and return home safely before war breaks loose. Adding new intriguing elements and twists to the familiar setting of Mars, Burroughs continues to delight science fiction enthusiasts.

The planetary romance offers a slower pace of action than its predecessors, therefore allowing Burroughs the opportunity to efficiently employ descriptive language to add more detail to life on the Red Planet. Consequently, the novel reveals interesting customs of its Martian residents, while offering insightful and vivid exterior descriptions, including the manners, customs, traffic patterns, and architectural elements. An undeniably enthralling fusion of adventure, fantasy, romance and danger, the novel offers a bit of everything to satisfy every appetite.

You are listening Thuvia, Maid of Mars audio by Edgar Rice Burroughs.
Dont forget to share if you like it.
If there is a problem or copyright issue. Let us know by sending the link of this page to email: report@audioaz.com.
Report

The Beasts of Tarzan

Five Children and It

The Emerald City of Oz

The Portrait of a Lady

The Portrait of a Lady

A Vindication of the Rights of Woman

The Master of the World

The Master of the World

At the Earth's Core

The Book of Art for Young People

At the Earth's Core

Tom Swift and the Visitor From Planet X

Comic History of the United States