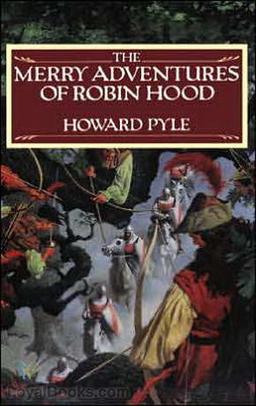 A modern day legend, Robin Hood is an archetypal hero of the common people who goes to great lengths to famously take from the rich and give to the poor. Luckily he is not alone in his mission, as his righteous views are shared by his band of Merry Men, a group of yeomen, and together they pursue an end to injustice and oppression.

Set in medieval England, the tale begins with the introduction of a young archer, who is provoked into conflict and committing a crime against the formidable Sherriff of Nottingham and is immediately dubbed an outlaw. Whilst fleeing from retribution, Robin finds himself hiding out in Sherwood Forest where he meets a lively group of characters, each having their own story to be told. Thereupon, the adventures of Robin Hood, his right-hand Little John, Friar Tuck, the cunning Tinker and the other Merry Men have begun. In a clash against the self-centered Sheriff and his adherents, Robin and his men must figure out a way to help the peasants from mistreatment by the wealthy, and clear their names at the same time.

Pyle has successfully recreated a medieval world by piecing together bits and pieces from old ballads and folklore, not excluding the noteworthy archery contests, a beautiful damsel in distress, battles of honor and furthermore adding his own touch to the excitement. Pyle most definitely outdoes himself as he illustrates an impeccable representation of the legendary adventures of the free spirited Robin Hood and his band of Merry Men. Being one of the first cohesive books about Robin Hood, The Merry Adventures of Robin Hood, is the most prominent version recognized by international audiences and a source for cinema adaptations. Filled with action, disguises and humor, the book does not leave anybody indifferent and it is no surprise that it has remained a household favorite throughout generations.

You are listening The Merry Adventures of Robin Hood audio by Howard Pyle.
Dont forget to share if you like it.
If there is a problem or copyright issue. Let us know by sending the link of this page to email: report@audioaz.com.
Report

As a Man Thinketh