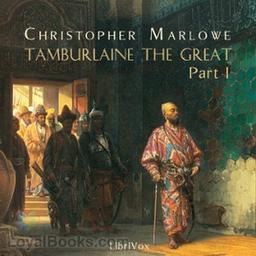 Tamburlaine the Great is the name of a play in two parts by Christopher Marlowe. It is loosely based on the life of the Central Asian emperor, Timur 'the lame'. Written in 1587 or 1588, the play is a milestone in Elizabethan public drama; it marks a turning away from the clumsy language and loose plotting of the earlier Tudor dramatists, and a new interest in fresh and vivid language, memorable action, and intellectual complexity. Along with Thomas Kyd's The Spanish Tragedy, it may be considered the first popular success of London's public stage.

Marlowe, generally considered the greatest of the University Wits, influenced playwrights well into the Jacobean period, and echoes of Tamburlaine's bombast and ambition can be found in English plays all the way to the Puritan closing of the theaters in 1642. While Tamburlaine is considered inferior to the great tragedies of the late-Elizabethan and early-Jacobean period, its significance in creating a stock of themes and, especially, in demonstrating the potential of blank verse in drama, are still acknowledged.

The play opens in Persepolis. The Persian emperor, Mycetes, dispatches troops to dispose of Tamburlaine, a Scythian shepherd and at that point a nomadic bandit. In the same scene, Mycetes' brother Cosroe plots to overthrow Mycetes and assume the throne.

The scene shifts to Scythia, where Tamburlaine is shown wooing, capturing, and winning Zenocrate, the daughter of the Egyptian king. Confronted by Mycetes' soldiers, he persuades first the soldiers and then Cosroe to join him in a fight against Mycetes. Although he promises Cosroe the Persian throne, Tamburlaine reneges on this promise and, after defeating Mycetes, takes personal control of the Persian Empire.

Suddenly a powerful figure, Tamburlaine decides to pursue further conquests. A campaign against Turkey yields him the Turkish king Bajazeth and his wife Zabina as captives; he keeps them in a cage and at one point uses Bajazeth as a footstool.

After conquering Africa and naming himself emperor of that continent, Tamburlaine sets his eyes on Damascus; this target places the Egyptian Sultan, his father-in-law, directly in his path. Zenocrate pleads with her husband to spare her father. He complies, instead making the Sultan a tributary king. The play ends with the wedding of Zenocrate and Tamburlaine, and the crowning of the former as Empress of Persia.

You are listening Tamburlaine the Great audio by Christopher Marlowe.
Dont forget to share if you like it.
If there is a problem or copyright issue. Let us know by sending the link of this page to email: report@audioaz.com.
Report

The Pirates of Penzance

The Lady From the Sea

The Sport of the Gods

The Lady From the Sea