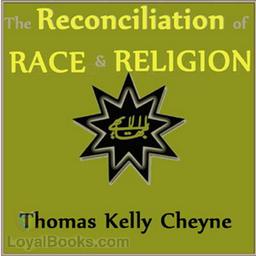 The Reconciliation of Races and Religions

“The primary aim of this work is twofold,” writes Thomas K. Cheyne. “It would fain contribute to the cause of universal peace, and promote the better understanding of the various religions which really are but one religion. The union of religions must necessarily precede the union of races, which at present is so lamentably incomplete…. I have endeavoured to study the various races and religions on their best side, and not to fetter myself to any individual teacher or party, for ‘out of His fullness have all we received.’ Max Müller was hardly right in advising the Brahmists to call themselves Christians, and it is a pity that we so habitually speak of Buddhists and Mohammedans. I venture to remark that the favourite name of the Bahais among themselves is ‘Friends.’… Wishing to get nearer to a ‘human-catholic’ religion I have sought the privilege of simultaneous membership of several brotherhoods of Friends of God. It is my wish to show that both these and other homes of spiritual life are, when studied from the inside, essentially one, and that religions necessarily issue in racial and world-wide unity.”

Thomas Kelly Cheyne, D.Litt. D.D., was an English divine and Biblical critic. He was born in London and educated at Merchant Taylors’ School, London and Oxford University. Subsequently he studied German theological methods at Göttingen. He was ordained in 1864 and held a fellowship at Balliol College, Oxford, 1868-1882. He became Oriel Professor of the Interpretation of Holy Scripture in 1885, which post he resigned in 1908. Cheyne was the first person to meet ‘Abdu’l-Bahá, the leader of the Bahá’í Faith, on His arrival in Oxford on the 31st of December, 1912. ‘Abdu’l-Bahá was impressed by Cheyne and gave him the epithet Ruhání (Spiritual) and addressed him as “my spiritual philosopher”. By 1914, this renowned Christian scholar became a member of the Bahá’í Faith. He wrote the present work, The Reconciliation of Races and Religions, in that same year. The book consists mainly of Bábí and Bahá’í historical and biographical notes. At the time, membership in the Bahá’í Faith did not require one to renounce membership in the church, so he remained a Christian minister. He was also interested in and had sympathies towards other religious teachings and movement such as the Religious Society of Friends (Quakers). (Introduction by Nicholas J. Bridgewater)

You are listening The Reconciliation of Races and Religions audio by Thomas Kelly Cheyne.
Dont forget to share if you like it.
If there is a problem or copyright issue. Let us know by sending the link of this page to email: report@audioaz.com.
Report

An Alphabet of History

The Pentecost of Calamity

Piloting Directions for the Gulf of Finland

Flowers and Ferns in their Haunts

Wopsy: The Adventures of a Guardian Angel