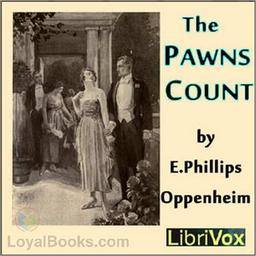 "I am for England and England only," John Lutchester, the Englishman, asserted.
"I am for Japan and Japan only," Nikasti, the Jap, insisted.
"I am for Germany first and America afterwards," Oscar Fischer, the German-American pronounced.
"I am for America first, America only, America always," Pamela Van Tale, the American girl, declared.

They were all right except the German-American.

It is during World War I. A chemist, Sandy Graham, has discovered a new powerful explosive, but he let's it slip in a London restaurant that he has made the discovery. Graham is ready to join some friends for luncheon at the restaurant but chooses to clean up before joining them. He never comes out of the restroom. Several spies from different governments set out to find him and the formula. What was particularly interesting to me about this espionage novel is that it was written in 1918, but it could just as easily have been from today.

You are listening The Pawns Count audio by Edward Phillips Oppenheim.
Dont forget to share if you like it.
If there is a problem or copyright issue. Let us know by sending the link of this page to email: report@audioaz.com.
Report

Scrambles Amongst the Alps in the Years 1860-69

The Haunted Man and the Ghost's Bargain

King of the Khyber Rifles