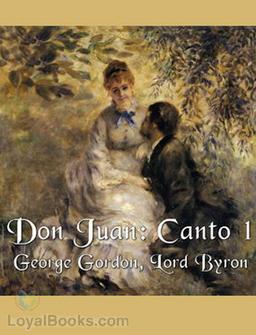 The legend of Don Juan is one that's been told and retold over the centuries by poets and novelists. His life has been the subject of operas, musicals and film. The earliest reference was in a fourteenth century Spanish play and compiled in book form in the seventeenth century. His life continued to fascinate writers like Moliere, Byron, Bernard Shaw, Pushkin, Shakespeare, Jose Saramago and musicians like Mozart, whose Don Giovanni is a brilliant work that still charms audiences and music lovers all over the world.

The legend of Don Juan in Spain portrays him as a wealthy and amoral character, who prides himself on his marvelous power to attract women of all ages. He also spends the rest of his time gambling and drinking. Occasionally, he indulges in crimes like murder when thwarted in fulfilling his desires.

Don Juan's name has become synonymous in English and many other languages with being a flirt and a womanizer. However, in Don Juan by George Gordon Byron, the serial heartbreaker is portrayed as a much wronged innocent who is instead easily taken in by women. This epic, satirical poem which runs into more than 16,000 lines remains unfinished as Byron continued to add verses till his death. It is interesting to note that the English pronunciation of Juan is used throughout the poem, to rhyme with words like “ruin” and “true one.”

In Don Juan: Canto I, Byron describes the rake's early years in Seville. The young Juan begins his infamous career at the age of sixteen by launching into a relationship with an older woman. Her outraged husband sets a posse of citizens to investigate the matter and they hope to catch the couple misbehaving. But Juan proves too savvy for them and when they burst into the lady's bedroom, he conceals himself under the bed! The entire episode is told in a farcical tone and ends with Juan being sent away by his mother to further his education, while his partner in crime is banished to a nunnery!

Byron hoped to write something that was similar in form and tone to his earlier work, Beppo, which was much admired. He sourced his material for Don Juan from various Spanish texts and uses a sardonic tone to describe events and people who are really neither admirable nor heroic. After his self imposed exile to Italy and Spain following a scandalous separation from his wife, Byron immersed himself in the works of Italian and Spanish writers. Don Juan is one of the works that arose from this period. It is considered an original, brilliant and path breaking work in English literature and is an entertaining read for Byron enthusiasts.

You are listening Don Juan: Canto I audio by George Gordon Byron, Lord.
Dont forget to share if you like it.
If there is a problem or copyright issue. Let us know by sending the link of this page to email: report@audioaz.com.
Report