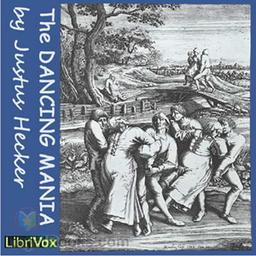 Numerous theories have been proposed for the causes of dancing mania, and it remains unclear whether it was a real illness or a social phenomenon.

One of the most prominent theories is that victims suffered from ergot poisoning, which was known as St Anthony’s Fire in the Middle Ages. During floods and damp periods, ergots were able to grow and affect rye and other crops. Ergotism can cause hallucinations, but cannot account for the other strange behaviour most commonly identified with dancing mania.

Many sources discuss how dancing mania, and tarantism, may have simply been the result of stress and tension caused by natural disasters around the time, such as plagues and floods…people may have danced to relieve themselves of the stress and poverty of the day, and in doing so, attempted to become ecstatic and see visions. Sources agree that dancing mania was one of the earliest forms of mass hysteria, and describe it as a “psychic epidemic”, with numerous explanations that might account for the behaviour of the dancers.

Another popular theory is that the outbreaks were all staged, and the appearance of strange behaviour was down to its unfamiliarity. Religious cults may have been acting out well-organised dances, in accordance with ancient Greek and Roman rituals. Despite being banned at the time, these rituals could be performed under the guise of uncontrollable dancing mania.

Justus Hecker, a 19th-century medical writer, described it as a kind of festival, where a practice known as “the kindling of the Nodfyr” was carried out. This involved jumping through fire and smoke, in an attempt to ward off disease.

It is certain that many participants of dancing mania were psychologically disturbed, but it is also likely that some took part out of fear, or simply wished to copy everyone else.

Although dancing mania was something confined to its period, some have identified modern-day activities that display some of its characteristics. It has been suggested that raving, an activity which became popular in the latter half of the 20th century, features characteristics of dancing mania. For example, raves may involve activities that onlookers consider odd (such as partying all night), the use of drugs to bring on hallucinations, and participants who are part of a subculture. (Introduction from Wikipedia, slightly adapted.)

You are listening The Dancing Mania audio by Justus Hecker.
Dont forget to share if you like it.
If there is a problem or copyright issue. Let us know by sending the link of this page to email: report@audioaz.com.
Report

A Yankee Girl at Fort Sumter

Strenuous Life: Essays and Addresses of Theodore Roosevelt, The

Memoirs of a Revolutionist, Vol. 2

Letters Written During a Short Residence in Sweden, Norway and Denmark

Rocks and Their Origins

Two Years and Four Months in a Lunatic Asylum

A Sister of Notre Dame

Jerusalem - The Emanation of the Giant Albion

The Wonder-Worker of Padua

Rocks and Their Origins

The Outline of Science Vol. 3

The Andes and the Amazon