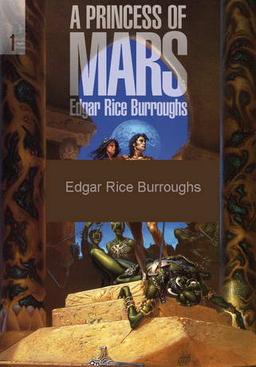 Burroughs’ first published book, as well as the first book in the Barsoom series, A Princess of Mars is a science fiction novel following the adventures of the heroic John Carter, after he is mysteriously transported to the planet Mars where he meets its divided inhabitants. The novel is considered to be a seminal for the planetary romance, which is a sub-genre of science fantasy. Burroughs’ book has also inspired a number of well known science fiction writers during the beginning of the 20th century.

The story sets off with the introduction of Civil War veteran John Carter, who while mining for gold in Arizona, gets into a skirmish with native Indians. Forced to evade inside a mysterious cave, he is mysteriously transported to Mars, or Barsoom as it is called by its inhabitants. Carter discovers that he has immense strength and agility caused by the lower force of gravity on the planet. He then becomes acquainted with the Tharks, a nomadic tribe described as having four arms, a fearsome temperament and mostly distinguished by their green skin. The Tharks first instincts to kill the strange creature are quickly pushed aside as they are amazed by Carter’s super abilities and decide to take him prisoner instead. Carter learns the importance the Tharks place on strength and brutality, and through his new found vigor he rises to earn a respectable place among the tribe. Soon the princess Dejah Thoris, who is a part of the humanoid red race of Helium, is captured by the Tharks. Carter’s attempt to save the princess causes him to be caught up in the politics of the two opposing Martian sides.

As an escapist fantasy, the novel contains many imaginative ideas which are successfully portrayed through its depiction of the Red Planet and includes a detailed illustration of alien culture, romance, and action. The detail in which it is written and its fast moving plot is what grabs and maintains the full attention of the reader. A story of loyalty and sacrifice, A Princess of Mars is a masterpiece of its time and an influence for the pulp fiction genre that followed.

You are listening A Princess of Mars audio by Edgar Rice Burroughs.
Dont forget to share if you like it.
If there is a problem or copyright issue. Let us know by sending the link of this page to email: report@audioaz.com.
Report

Tarzan of the Apes

Poems Every Child Should Know

Tarzan of the Apes

The Mystery of the Yellow Room

The Memoirs of Sherlock Holmes

The Return of Sherlock Holmes

The Adventures of Sherlock Holmes

Relativity: The Special and General Theory